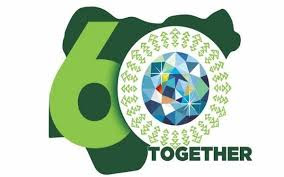 Today, Nigeria is celebrating its 60th year of freedom from the British rule. Despite the plethora of challenges bedeviling it, from the civil war to Bokoharam terrorism and recently banditry, we can still look back and see many reasons to celebrate. That's why this year's independence theme, 'Celebrating together' is apt.

Nigeria as a nation is in a crisis of national identity, the country's diverse and multi-cultured society have become a stumbling block to national development. Despite laws like the Federal Character Commission Act that prevents one section from dominating public offices, stability has not been achieved as each election cycles we continue to sign deals of alternating leadership based on religion and section devoid of merit.

The legitimacy of the constitution and the nation is always disregarded whenever our various tribal and religious identities are infringed upon. Francis Fukuyama in his book 'Political Systems and Political Decay" has this to say about Nigeria's Crisis of national identity, "The Nigerian state is weak not only in technical capacity and its ability to enforce laws impersonally and transparently. It is also weak in a moral sense: it has a deficit of legitimacy. There is little loyalty to a nation called Nigeria that supersedes ties to one’s region, ethnic group, or religious community" .

National identity is very critical to the development of any nation, as weak national identity and mutual patriotism are by products of failed and weak nations as presently obtainable in Sub-Saharan Africa. Most of these nations were the product of Colonial error. Nigeria itself is not a historical nation, what we now know as Nigeria was birthed in 1914 by Lord Lugard unlike India which was also colonized by the British, Nigeria was not organized before the British colonial rule, so when the British were leaving, they left an unorganized nation without strong institutions. Nigeria's independence was handed down to it on a platter of gold unlike other countries like India and South Africa who had to fight for their freedom. This lack of organization led the country to a very sad civil war in which millions where killed.

But the good news is that Nigeria is not alone, other countries started this way, for example Indonesia as a country did not exist before the 20th century, in his book "Nationalism, Islam and Marxism, Indonesian First President Sukarno laid out a national identity plan. Although Indonesia was a Muslim majority state, he rejected the idea of aa theocratic state saying it will hurt the other religious minorities. Indonesia adopted a mass education in schools as a means to bringing its diverse citizens together. China, Japan and other Asian states built their indemnity from the scratch.