The Presidential candidate of the Allied Congress Party of Nigeria (ACPN), Oby Ezekwesili has drop down her bid for the office of the president, and constesting elections in the upcoming general elections slated for February 1st.

In a statement released earlier today, Mrs Ezekwesili said she stepped down to join a coaliation capable of unseating the ruling party APC.

an aide to Ms Ezekwesili, Ozioma Ubabukoh, confirmed that the statement as valid that she is withdrawing from the race 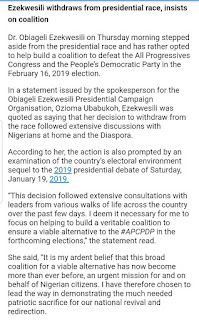