Ambode vows to work against apc in lagos state 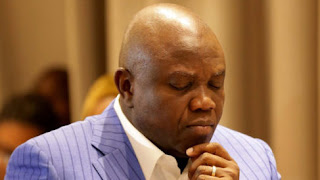 The Lagos state governor Dr Akinwunmi Ambode has vowed to work against his party APC in the state.

The promise came after the state house assembly began an impeachment process of the controversial Governor, who lost his second term bid to a 'starter'.

Ambode in response threatened to work against the ruling apc in the upcoming elections, and support the candidate of the opposition Jimi Agbaje PDP.