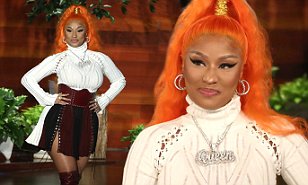 Photo Credit: Dailymail
says she wanted to punch Kylie Jenner's boyfriend Travis Scott 'in his f***ing face' in the wake of their beef over album sales last month.

The Barbie Tingz artist, 35, is a guest on Tuesday's season premiere of Ellen. She makes clear she's still irritated after the Houston rapper's Astroworld album finished ahead of her latest release Queen on the Billboard 200, with the belief he pumped up his sales numbers by bundling the album with his fashion line and other items.

The Queens, New York native, whose full name is Onika Tanya Maraj, said that while she was not immediately 'upset or angry' when she put the rapper on blast on her Queen Radio show, as it's a matter of 'what's right or what's wrong